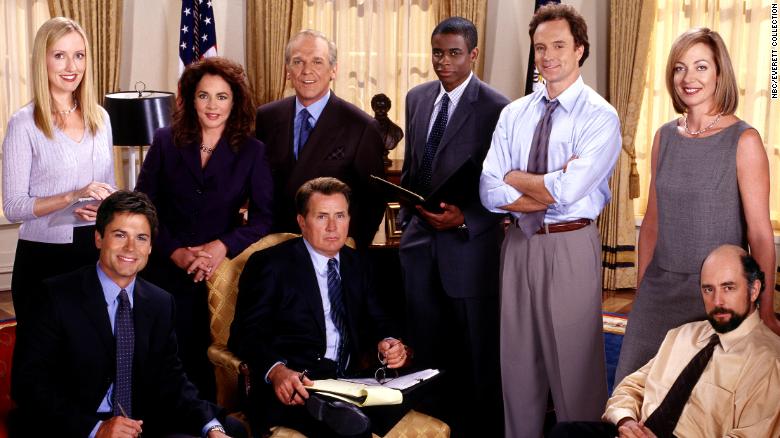 The cast of ‘The West Wing.

“The West Wing” can now be added to the list of TV reunions in the age of coronavirus, but this time, they’re coming together for a specific cause: To benefit Michelle Obama’s voter-participation organization “When We All Vote” by staging an episode for the streaming service HBO-Max. The service announced that series creator Aaron Sorkin and the cast would unite for a staged theatrical presentation of the “Hartsfield’s Landing” episode from the Emmy-winning drama’s third season. According to HBO Max, the event which will be shot in a Los Angeles theater over several days in October — will be directed by Thomas Schlamme, who masterminded the White House drama’s walk-and-talk style.

The program is expected to air on an as-yet-unspecified date prior to the election in November. Sorkin also has a theatrical background, including the play “A Few Good Men” and the acclaimed recent Broadway revival of “To Kill a Mockingbird.” He’s writing additional original material as part of the special. “The West Wing” aired on NBC but was produced by Warner Bros. Television, which, like CNN, is a unit of Warner Media, which will make a donation to When We All Vote in conjunction with the effort.” When We All Vote” is a nonprofit organization, created to inspire increased voter participation in every election. Rob Lowe, Dulé Hill, Allison Janney, Janel Moloney, Richard Schiff, Bradley Whitford and Martin Sheen will reprise their roles for the special, which will include additional guest appearances and a message from co-chair Michelle Obama.

Originally broadcast in 2002, the episode focuses on a tense moment in US-Chinese relations over Taiwan, while Whitford’s character, Josh, worries about a small town in New Hampshire whose voting results are believed to predict who will win the state’s primary. The full seven-season run of “The West Wing,” which premiered in 1999, is currently available on Netflix. But all the studios have used their own libraries to beef up their streaming services, and the series is expected to shift to HBO Max at some point in the future. Other series that have mounted reunions since the pandemic began include NBC specials devoted to “Parks and Recreation” which benefited the charity Feed America — and “30 Rock” which served as a cheeky promotion for the network’s upfront presentation.