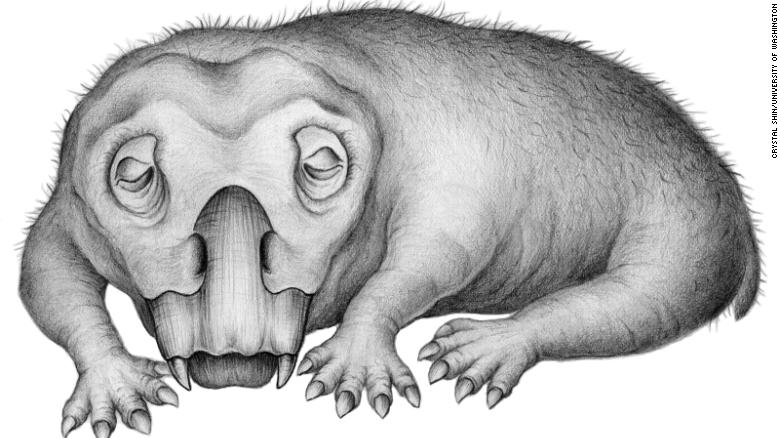 An artist’s rendition of Lystrosaurus in a state of torpor.

New evidence suggests the Lystrosaurus species that roamed the Earth with the dinosaurs went into a state of hibernation to survive what is modern day Antarctica. The Lystrosaurus is a mammal-like animal from the early Triassic period that roamed modern day regions such as India, South Africa and Antarctica over 250 million years ago.

It has tusks like an elephant and a beak similar to a turtle, and it was roughly the size of a pig. Scientists at the University of Washington used fossils of the animal’s tusks to test for stress differences between the species living in polar climates and warmer ones, such as in Africa. The tusks are key because they can measure periods of time in the animal’s life, similar to rings on a tree. They found prolonged stress consistent with animals that experience torpor, or prolonged rest such as hibernation, and it is the oldest instance of torpor known in fossil records. These preliminary findings indicate that entering into a hibernation-like state is not a relatively new type of adaptation. It is an ancient one, lead author Megan Whitney, a doctoral student in biology at the University of Washington, said in a news release.

To see the specific signs of stress and strain brought on by hibernation, you need to look at something that can fossilize and was growing continuously during the animal’s life, said co-author Christian Sidor, a biology professor at the University of Washington. Many animals don’t have that, but luckily Lystrosaurus did. The scientists also believe that it may explain why the animal survived the mass extinction at the end of the Permian period, which wiped out 70% of vertebrate species on land.

The researchers said they cannot definitively prove Lystrosaurus went into true hibernation as we know it, but the stress could be caused by another form of short-term torpor. What we observed in the Antarctic Lystrosaurus tusks fits a pattern of small metabolic ‘reactivation events’ during a period of stress, which is most similar to what we see in warm-blooded hibernators today, Whitney said. The findings were published in a study in the communication biology Journal on August 27th