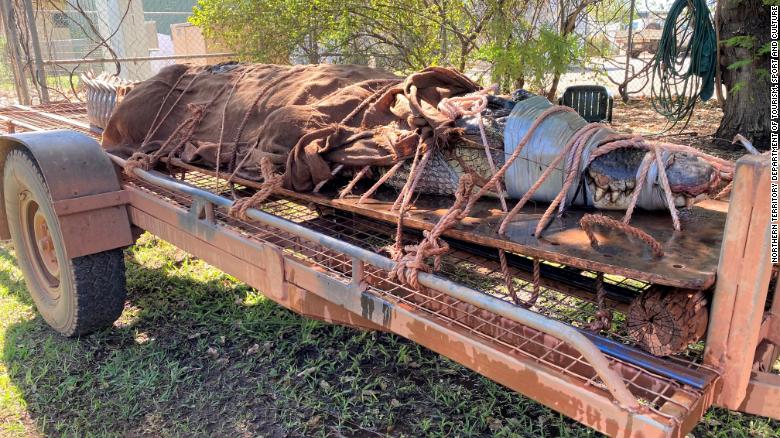 An enormous saltwater crocodile measuring 14.4 feet (4.4 meters) has been caught at a remote tourist hotspot in Australia’s Northern Territory. The crocodile, estimated to weigh 771 pounds (350 kilograms), was captured by wildlife rangers last Friday at a trap in the Flora River Nature Park, a popular tourist destination southwest of the outback town of Katherine. The crocodile is the largest caught in the area in years, according to a spokesperson at the Northern Territory Department of Tourism, Sport, and Culture. The capture has been taken to a crocodile farm and will possibly be used for breeding, the spokesperson said. In July 2018, an even larger saltwater crocodile measuring 15.4 feet (4.7 meters) was trapped and caught in the Katherine River closer to the sea.

Saltwater crocodiles are the largest crocodile species — and the largest living reptile in the world. Adult males can reach up to 23 feet (7.0 m) and weigh over 2,200 pounds (997.9 kg). The formidable predators typically live in brackish waters near the coast, such as in mangrove swamps, river estuaries and lagoons. There are an estimated 100,000 saltwater crocodiles living in the wild in the Northern Territory, according to the state government. They’re not culled in the state and are protected under state and national laws. But problem crocodiles in the state will be found and removed by wildlife rangers using traps and harpooning techniques. The rangers typically capture more than 250 problem crocodiles each year, which are transferred to crocodile farms or destroyed. This year, a total of 167 saltwater crocodiles have been caught across the Top End, the northernmost section of North Territory, where 80 traps have been placed in strategic locations, according to the state government.