Nearly 300 protesters were arrested in Hongkong on Sunday, according to the city’s police force, during one of the largest pro-democracy demonstrations since China imposed a national security law in June. Hong Kong people were originally scheduled to go to the polls on Sunday, but in July the city’s leader postponed legislative elections for a year, citing public health concerns. Some pro-democracy activists, who had aimed to win a majority in the city’s Legislative Council, accused the government of using the coronavirus pandemic as an excuse for fear of pro-government parties doing badly. Officers arrested 289 people in the neighborhoods of Yau Ma Tei and Mong Kok, with the majority suspected of breaching unlawful assembly laws, police said. Among them, 270 were suspected of unlawful assembly, including 169 men and 101 women; 5 men were suspected of misconduct in public places; 5 men were suspected of failing to produce valid identity documents, police said in a Facebook post. 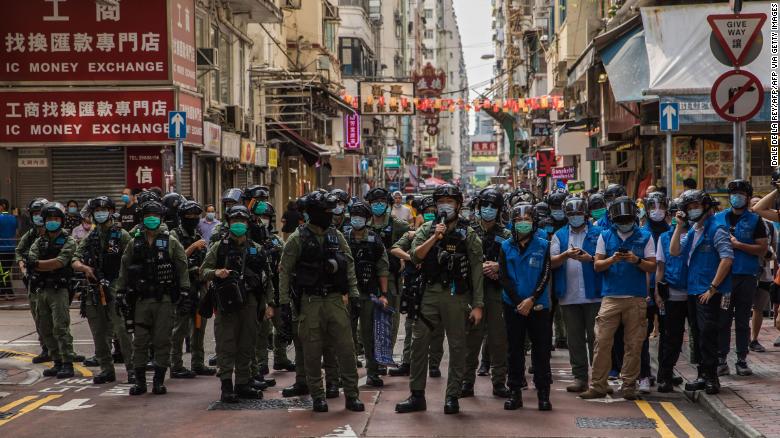 Police patrol an area in Hong Kong after protesters assembled on September 6.The remaining people were arrested “on suspicion of attacking police officers,” loitering and obstructing police from performing their duties, the statement added. Hong Kong police earlier said they issued several warnings to those gathered at Yau Mai Tei and asked them to disperse, but some people continued to assemble. They also reiterated that attending prohibited group gatherings was an illegal act, as was any attempt at unauthorized assembly, adding that such acts also seriously increased the risk of spreading the coronavirus.

Public gatherings in Hong Kong are currently limited to two people under restrictions to curb the spread of the virus. One woman was arrested at Yau Ma Tei for assaulting and obstructing police officers, and for using protest slogans that police allege promoted Hong Kong independence — now criminalized under the new national security law, which bans secession, subversion, terrorism and collusion with foreign forces .Later, CNN producer Bex Wright witnessed police in Mong Kok surge toward protesters, using pepper spray and detaining multiple people on the scene. Some protesters were arrested by plainclothes police officers.

Elsewhere, pro-democracy activist Tam Tak-Chi was arrested at home on Sunday morning, for allegedly “uttering seditious words,” according to the police. Senior Superintendent Steve Li Kwai-Wah, of the police force’s National Security Department branch, said Tam is accused of giving anti-government talks at booths he allegedly set up on the street in the Kowloon area. The activist, 47, is also accused of posting seditious material on Facebook. Hongkong has been in political turmoil since June 2019, when anti-government protests broke out in the city, initially spurred by a controversial extradition bill that was eventually shelved.

Since then, the demonstrations have evolved into a broader protest movement against the city’s pro-Beijing government, the Chinese central government, and the police force, which many accuse of excessive force and violent tactics. Police have consistently argued that their tactics are the result of protester violence and disruption, and have strenuously denied wrongdoing and accusations of brutality. The crisis shows no sign of abating — but Covid-19, and the need for social distancing, halted the opportunity for public assembly in 2020. During the lull, Beijing subsequently imposed the new national security law before the unrest could resume.

Under the sweeping law, which bypassed Hong Kong’s semi-democratic legislature, those convicted could face sentences of up to life in prison. Since it came into force, at least 24 arrests have been made, including four student activists over social media posts. Political parties have disbanded, once-ubiquitous protest signs were pulled down across the city, and books deemed to be in contravention of the law have been removed from stores and libraries. Some pro-democracy figures turned their focus from the streets to the city’s legislature — but the law was used in July to bar 12 candidates, including several young activists, from standing for election. A statement from the Hong Kong government said the candidates had been barred on the grounds that they would not uphold the Basic Law, Hong Kong’s de facto constitution.