On Monday, one person was injured in the South Korean city of Busan on the country’s southeastern coast, when strong winds flipped a car, according to the ministry. Turbine generators in two nuclear power plants in the country’s southeastern city of Gyeongju stopped automatically on Monday. The ministry is reviewing the cause. On Sunday, Typhoon Haishen pounded the Japanese island of Kyushu, with windspeeds of nearly 195 kph (121 mph). Authorities in Kyushu’s Miyazaki prefecture said one man was rescued, but three other men and one woman remain missing. Teams are continuing to search for the four missing people, who disappeared after homes were washed into a river in southwestern Japan, according to local authorities. At least 46 people were injured in Kyushu as the typhoon passed over on Sunday, according to Japanese public broadcaster NHK. At least 253,530 households in Kyushu were still without power as of Monday afternoon, according to provider Kyushu Electric. 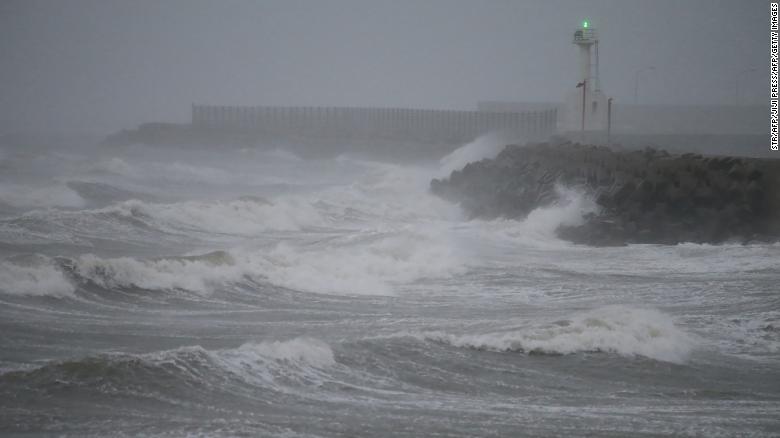 Waves caused by Typhoon Haishen crash on the coast of Shikanoshima island, Fukuoka prefecture, on September 7, 2020.

South Korea is reeling from more bad weather as Typhoon Haishen moves along the Korean Peninsula after battering southwestern Japan, leaving four people missing. Earlier on Monday, Typhoon Haishen had winds of 160 kilometers per hour (99 miles per hour), making it equivalent to a low-end Category 2 hurricane in the Atlantic. It’s the second major storm to hit the region in less than a week after the region was lashed by Typhoon Maysak on Wednesday. At least 1,640 South Koreans have been evacuated out of the storm’s path so far, according to South Korea’s Ministry of the Interior and Safety. Around 23,500 households remain without power due to strong winds brought by Haishen, according to South Korea’s eastern North Gyeongsang province.

Typhoon Haishen comes as the region reels from last week’s Typhoon Maysak, which followed a similar path and also brought destructive winds and heavy rain. A cargo ship with 43 crew members and almost 6,000 cows onboard went missing near southern Japan during Typhoon Maysak last Wednesday. Search and rescue efforts were suspended on Saturday due to bad weather, according to Japan’s Coast Guard. Three sailors were rescued from the sea, but one of them later died, the Coast Guard said. 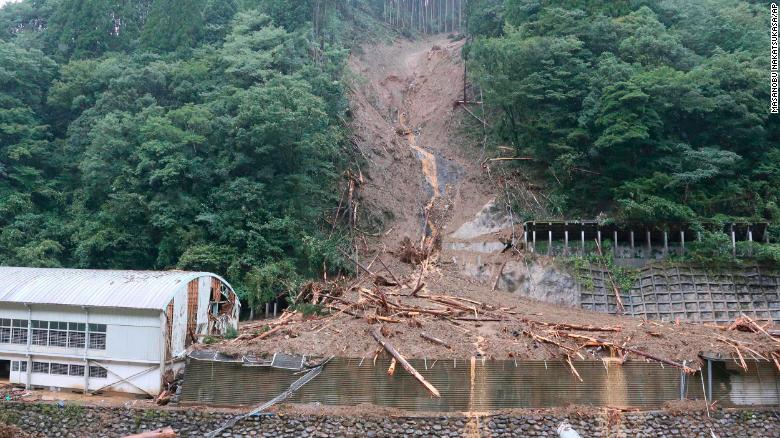 A photo shows the landslide site where four people are missing due to the Typhoon Haishen in Shiiba Village, Miyazaki prefecture, southwestern Japan, on September 7, 2020.

North Korea’s state news agency KCNA reported that the country’s leader Kim Jong Un had called on Pyongyang citizens to volunteer for repair efforts in the areas damaged by Typhoon Maysak. The North Korean leader said more than 1,000 homes were destroyed and homes and public facilities in South Hamgyong province were inundated, causing many people to be displaced. KCNA reported that around 300,000 Pyongyang city party members answered his call. “The number of volunteers is continuing to grow as workers are following party member’s example,” KCNA said. Although Japan and the Korean Peninsula often experience typhoons and torrential rain during summer, the damage this year has been particularly bad. At the end of last month, Typhoon Bavi which was equivalent to a Category 1 storm battered western North Korea. After the typhoon, North Korean state media reported that dozens of buildings had been damaged, and power and water systems had been impacted.