Authorities in the Chinese capital Beijing have ordered importers to avoid frozen food from countries suffering severe coronavirus outbreaks after several incidents of imported seafood testing positive for the virus. According to a statement from the Beijing Municipal Commerce Bureau, “customs and local governments have repeatedly detected the coronavirus in imported cold chain food, proving it risks contamination. The bureau urged importers to closely monitor the pandemic situation around the world and “take the initiative to avoid importing cold chain foods from areas severely hit by the pandemic.”

Companies are also instructed to improve their warnings and reporting mechanisms, and to inform authorities quickly if products test positive. Health authorities, including the World Health Organization (WHO) and the US Centers for Disease Control and Prevention (CDC), have said the possibility of catching the coronavirus through food is low, but China, which has largely stamped out domestic transmission of the virus, is on high alert for possible re-contamination. In June, China suspended poultry imports from a Tyson foods plant in the United States because of concerns about an outbreak of coronavirus at the facility. 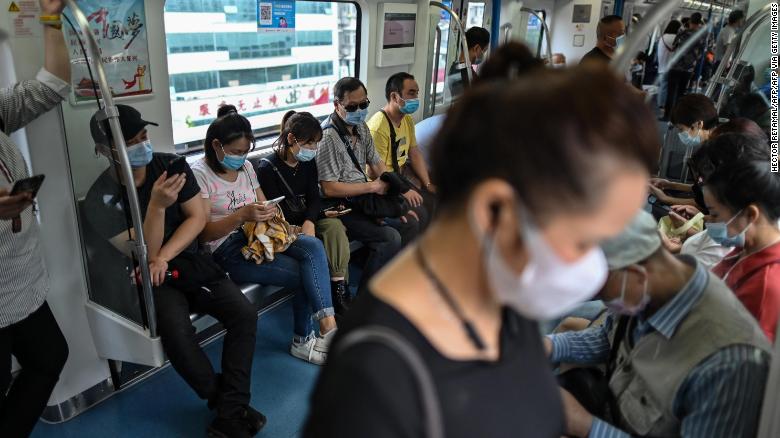 Passengers ride the subway in Wuhan, in China’s central Hubei province on September 28, 2020.

The city where cases of the coronavirus were first detected has largely returned to normal. Last month, a batch of frozen chicken wings imported from Brazil tested positive for coronavirus in the southern Chinese city of Shenzhen, one of multiple incidents in which the virus had been detected on food products. Those incidents sparked increased screening of imported foods nationwide, and heightened scrutiny of products coming from places badly stricken by the pandemic, such as Brazil. As of September 7, China had suspended imports from dozens of food companies across at least 19 countries and regions where workers have been infected with coronavirus, according to state media. Last week, China’s General Administration of Customs announced “emergency precautionary measures” against a Norwegian company after a frozen seafood package tested positive for the virus.

On Saturday, customs officials said that samples taken from the outer packaging of imported Russian aquatic products in Shandong province tested positive for coronavirus, while on Friday China Customs said the inner packaging of a batch of frozen fish from Brazil also tested positive for the virus. China’s National Health Commission said Monday there had been no new locally transmitted virus cases in the past 24 hours, or any new deaths connected to the pandemic. According to a tally by Johns Hopkins university there have been 90,483 confirmed cases of coronavirus in China and 4,739 deaths. The vast majority of cases were detected in the early stages of the pandemic, with the number of new infections below 500 since early March.