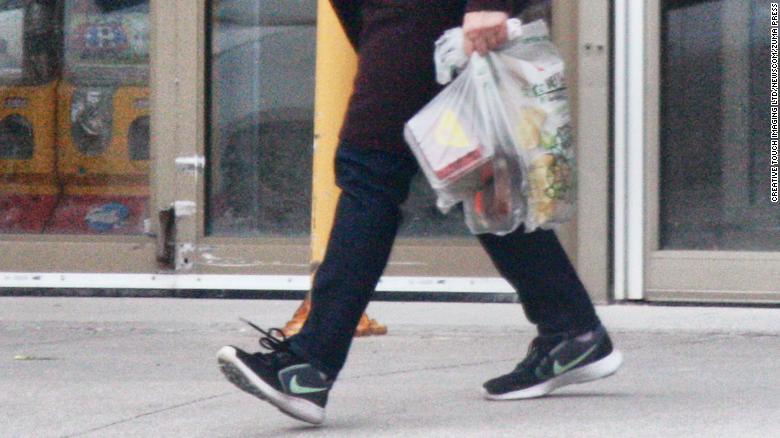 A woman in Toronto carries her groceries in plastic bags on April 24, 2020.

Travelers to Canada should not expect to see some everyday plastic items starting next year. The country plans to ban single-use plastics — checkout bags, straws, stir sticks, six-pack rings, cutlery and even foodware made from hard-to-recycle plastics nationwide by the end of 2021, the move is part of a larger effort by the nation to achieve zero plastic waste by 2030. Plastic pollution threatens our natural environment, it fills our rivers or lakes, and most particularly our oceans, choking the wildlife that live there, Canadian Environment Minister Jonathan Wilkinson said Wednesday in a news conference. Canadians see the impact that pollution has from coast to coast to coast. The plan also includes improvements to keep “plastic in our economy and out of our environment, he said.

Single-use plastics make up most of the plastic litter found in Canada’s freshwater environments, according to the government. Prime Minister Justin Trudeau first announced the country’s plan to ban these kinds of plastics last year, describing it as “a problem we simply can’t afford to ignore,” according to a news release. In addition, single-use plastics have three key characteristics that make them a target of the ban, according to Wilkinson, they are harmful in the environment, they are difficult or costly to recycle and there are readily available alternatives,” he said. According to the government, Canadians throw away more than 3 million tons of plastic waste every year and only 9% of that plastic is recycled, the rest goes to landfills or into our environment, said Wilkinson. Although the new regulations won’t come into effect until 2021, the Canadian government is releasing a discussion paper outlining the proposed plastics ban and soliciting public feedback, it will be available until December 9 of this year.

As the world grapples with the coronavirus pandemic, personal protective equipment has become a part of people’s day-to-day lives. Wilkinson clarified that the single-use plastic ban would not affect “access to PPE or any other plastics used in the medical environment, nevertheless, he said the government is keeping an eye on pollution stemming from the use of protective equipment. We did discuss pollution considerations relating to PPE at the Canadian Council of Environment Ministers meeting earlier this summer, Wilkinson said. We committed, with the provinces and territories, to working together and with industry to ensure that we can properly dispose of PPE so that it does not end up in our natural environment, we are also investigating solutions to recycle PPE where it is safe to do so, and add options to make some of the PPE biodegradable,” he added.