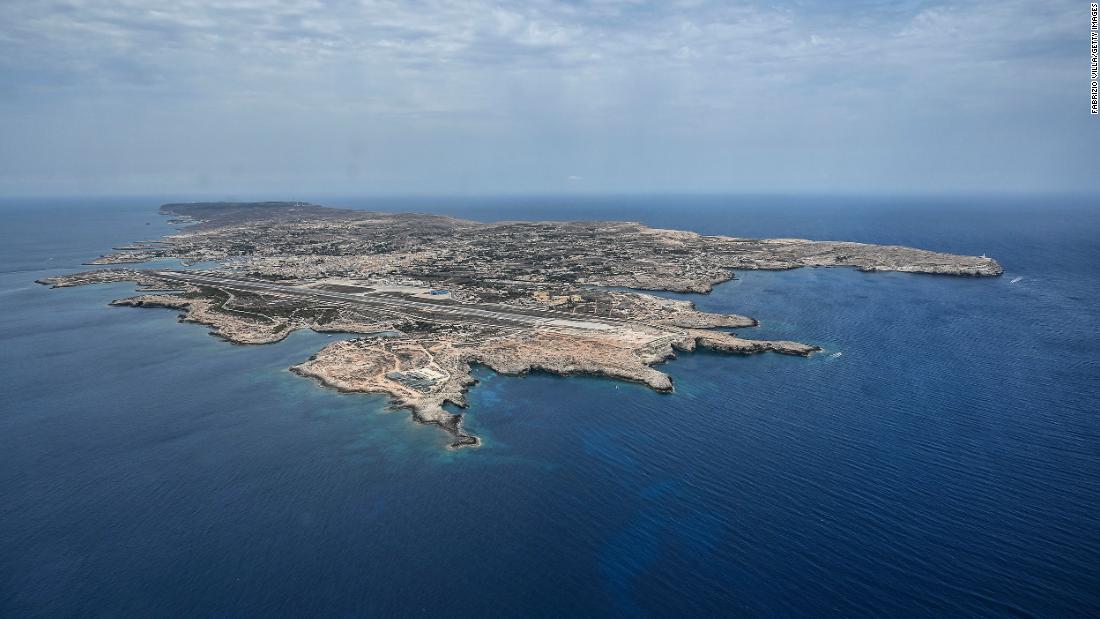 Aerial view of the island of Lampedusa, Italy

A young couple from Algeria must have thought their wedding rings were lost forever when their tiny boat capsized, they were among the lucky ones on that trip from Libya to Italy, of the 20 people aboard, five have died, including a little girl, according to the Italian arm of Doctors Without Borders (MSF).

Ahmed and Doudou survived, rescued by fishermen, like the other survivors, the couple, in their early twenties, are still in shock, they were at sea for 48 hours when the boat capsized, all of them ended up in the water,” Ahmad Al Rousan, a cultural mediator for MSF in Italy, told reporters in a phone interview. Al Rousan was one of the team providing psychological support for the survivors rescued from Ahmed and Doudou’s boat a few days after it capsized in mid October. When rescuers from the maritime rescue NGO ‘Open Arms’ came across a half-sunken boat adrift in the Mediterranean on November 9, a few weeks after the disaster, they found a red backpack in it, covered by tiny sea creatures, the rucksack contained just a few necessities for the crossing, a couple of shirts, a spare pair of shoes, a phone charger, and two wedding rings inscribed with the names Ahmed and Doudou.

In the first moments, we thought that it probably belonged to someone that was dead or lost in the trip,” Riccardo Gatti, the president of ‘Open Arms’ Italy, told reporters. The significance and the meaning of what this was like ‘Wow here’s something that really belonged to someone and we do not know where they are or if they are still alive. ‘Open Arms’ shared photos of the backpack and it’s contents, including the rings, on social media. The group also passed them to MSF and other organizations they knew provided support to the survivors. Rescuers working in the Mediterranean often find personal items lost at sea, but the odds of re-uniting them with their owners if they are still alive are next to none. Al Rousan has been working in various rescue operations for nine years and he can’t remember it ever happening. When (Open Arms) contacted us, I told them it was impossible to find the owners,” he said, but they tried anyway, passing the photos of the backpack to some of the people who were on the same boat as Ahmed and Doudou. “And then they called us and said the backpack belonged to Ahmed,” Al Rousan said.

I spoke with Ahmed directly and he started to explain to me what’s inside, because the photo I sent was just of the backpack and some of the things on the deck,” he said, adding that Ahmed told him about the rings, explaining they were in the backpack because the couple was hoping to have them fixed after arriving to Europe. “They were little bit broken,” Al Rousan said. He told me he was really happy to see the photo and he was very emotional about the rings, but he’s still in shock and said ‘I keep thinking about the five people who lost their lives in front of us. Gatti said the rescue boat’s crew have cleaned the backpack and it’s contents, and plan to send it to Ahmed as soon as their Covid-19 quarantine is over.