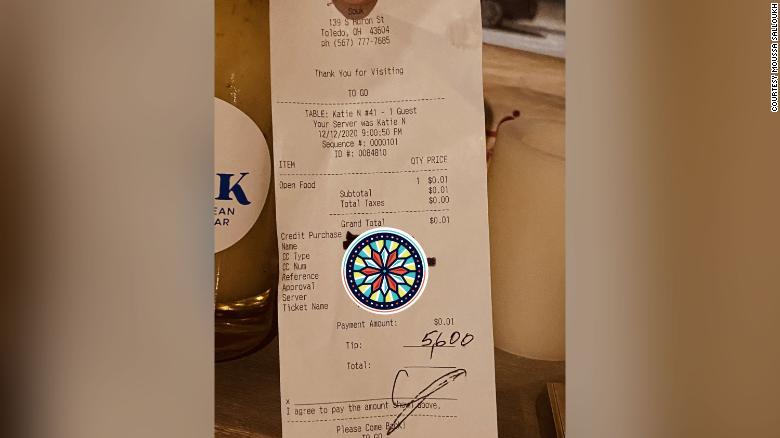 A customer left the employees of Souk Mediterranean Kitchen a $5,600 tip.

Employees at a restaurant in Ohio received a Christmas gift they didn’t see coming when a customer left a $5,600 tip for the entire staff to split. The guest, who asked the restaurant to allow him to remain anonymous, was dining at Souk Mediterranean Kitchen in Toledo on December 12 when he left the massive tip for all 28 employees, including those who were off that day.

After dividing it, each staff member took home $200.”There was a lot of tears, I’m tearing up now talking about it,” Moussa Salloukh, Souk’s owner and chef, told CNN. Your restaurant staff becomes your family and everyone cares about each other. I’ve been staying out of the kitchen to give employees hours to get through and put gifts under the tree for their kids, so this was so huge for us, multiple employees who weren’t able to afford a Christmas tree or presents for their family because of the pandemic told Salloukh the tip was the only thing that made that possible.

A lot of them felt like someone was looking and watching down on them, it gave us a lot of hope, it was just a beautiful thing to do for 28 strangers you don’t even know, Salloukh said. Salloukh opened his restaurant in October 2019, and like many other business owners, was struggling to keep it alive due to the coronavirus pandemic. In September, the National Restaurant Association said 100,000 restaurants had closed so far in 2020, about 60% of the businesses that closed during the pandemic will never reopen, and restaurants have suffered the most, according to data from Yelp. But now, as the restaurant gets back on its feet, Salloukh says the kind gesture is a “reminder” that despite the obstacles and the struggles, everything will be OK.

The restaurant was a tribute to my mother and everything was going great until March, when we were forced to shut down, he added. “Financially there was a huge impact, but we did just about everything to survive, then all of a sudden this gentlemen comes in and gives us a $5,600 tip for all our employees. ‘Thank you’ isn’t enough.”