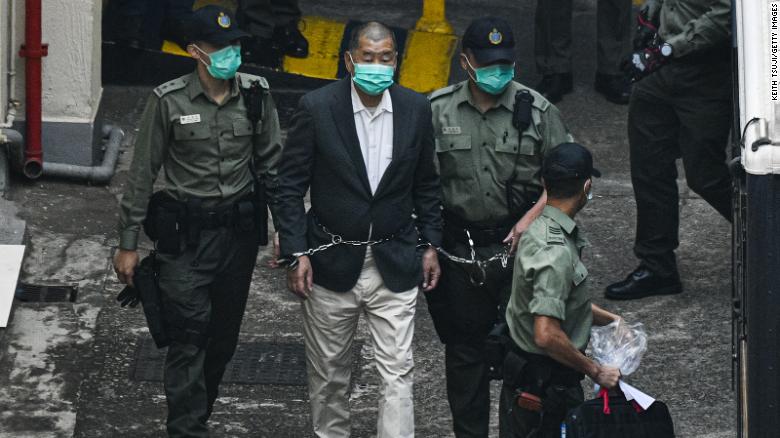 A Hong Kong court has sentenced several of the city’s leading pro-democracy campaigners to between 8 and 18 months in prison over their roles in unauthorized assemblies at the height of the 2019 protests. Among those sentenced was Jimmy Lai, who founded the pro-democracy Apple Daily newspaper. Lai received 12 months in prison for his involvement in a peaceful protest on August 18.

She said sentence imposed should “reflect the seriousness of the offense and culpability,” as well as the “conscious decision” by the defendants to break the law. Woodcock heard two cases concurrently and has yet to hand down sentences relating to a protest on August 31, 2019, meaning that Lai and Lee could yet receive lengthier prison terms. Several defendants avoided prison, receiving suspended sentences in respect of their advanced age and long record of public service. They included Martin Lee, an 82-year-old veteran barrister often referred to as “Hong Kong’s father of democracy,” and veteran pro-democracy activists Albert Ho, Margaret Ng and Leung Yiu-chung.

The sentences were handed down after Lai and others were found guilty earlier this month of organizing and participating in two protests on August 18 and August 31 in 2019, both of which had been banned by police. Each charge carried with it a maximum penalty of five years in prison. Lai’s barrister, Audrey Eu, said during Friday’s mitigation hearing that Lai should not be given custodial sentence because he did not breach the peace. “He was exercising his constitutional right of peaceful assembly, (but not) doing it out of personal gain or greed,” she said. Separately, prosecutors added a second charge under the national security law against Lai during another court hearing on Friday.

In addition to the unauthorized assembly charges, Lai now faces two counts of colluding with foreign forces, which carry a maximum penalty of life imprisonment. Ng, a 73-year-old barrister, received a round of applause in court after she made a speech saying she was determined to stand up for Hong Kong’s democratic rights. “The rule of law not only has to be defended in court, but in the streets and community,” Ng said. “Rule of law is not just about the law, but governance, and laws that protect rights tend to win trust among the people. “Lawyer Graham Harris, who represented Martin Lee and Albert Ho, also highlighted their decades-long public service as lawmakers. “Justice does not have to be served by locking up two people who have devoted the lives to serving the community,” he said.

With regard to the protest on August 18, Lai and eight others were found guilty after they led hundreds of thousands of protesters from a rally in Victoria Park on a march to the city’s Central District, to call for greater government accountability and an independent investigation into police brutality. While permission for a march had been refused by police, organizers claim that up to 1.7 million people took part in the demonstration, bringing parts of the city to a standstill. In the second case, Lai and two others were found guilty over a separate protest on August 31 that year. While defense lawyers challenged that police should not be given the powers to ban protests because it would violate the constitutional protection for freedom of assembly, Justice Woodcock said Hong Kong’s top court had previously upheld its legality.

Ahead of Friday’s hearing, dozens of people could be seen queuing up outside the court building for a seat in the public gallery. The court opened a few more areas as extensions to accommodate the crowd. The ruling comes after Hong Kong celebrated its first National Security Education day on Thursday, during which police commissioner Chris Tang accused the United States of using its agents in Hong Kong to undermine national security. “The police force and I will spend energy throughout our lives to find out who you are, and look for evidence to convict you in court,” he said.