At least 19 people, including nine children, were killed Sunday in a fire ignited by a malfunctioning portable space heater at a Bronx apartment complex, the city’s deadliest blaze in more than 30 years.

New York City Fire Commissioner Daniel Nigro said the fire “started in a malfunctioning electric space heater” in a bedroom of a duplex apartment on the second and third floors of the 19-story Twin Parks North West complex in New York City’s West Bronx. The door of the apartment was left open, allowing smoke to quickly spread throughout the building, Nigro said. 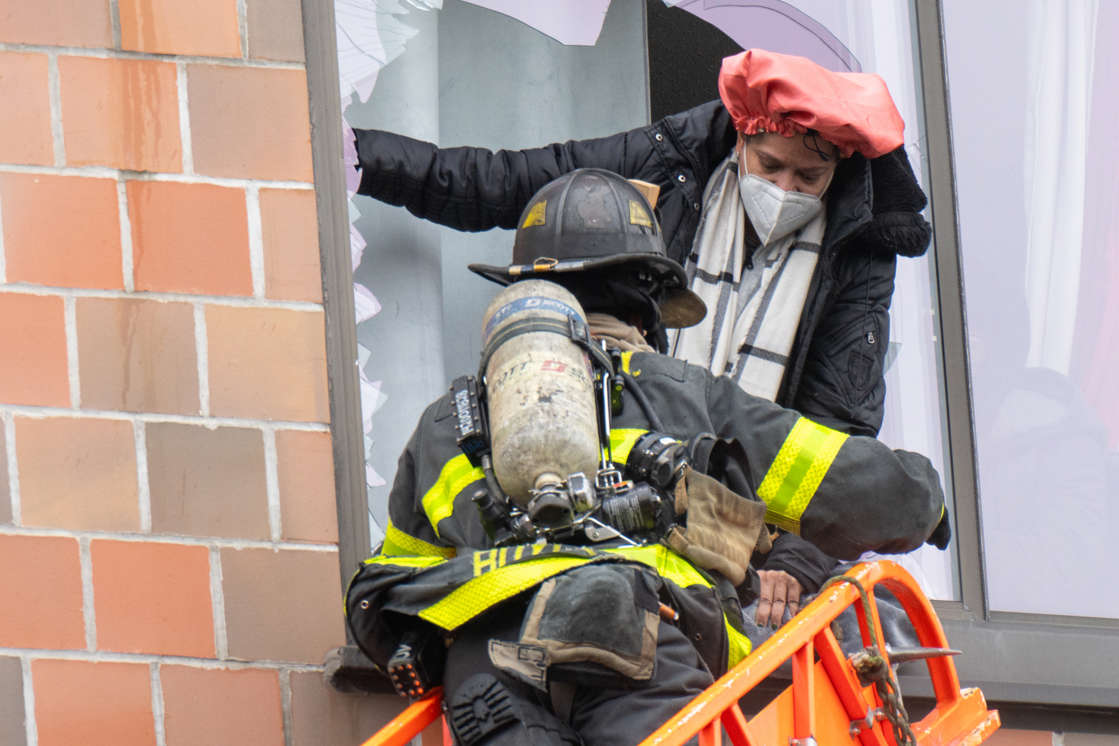 Firefighters hoisted a tower ladder to rescue people through their windows

Thirteen people remained hospitalized in critical condition as of Sunday evening, New York Mayor Eric Adams said at a news conference. In all, more than five dozen people were hurt. Most of the victims had severe smoke inhalation, Nigro added.

Stefan Ringel, a senior adviser to Adams, told the Associated Press the children killed were 16 years old or younger. According to Nigro, victims were found on every floor of the building.

“In buildings like this there are no fire escapes, there are interior stairways,” Nigro confirmed. “Residents should know where the stairwells are. I think some of them could not escape because of the volume of smoke.”

The fire department said over 200 members responded to the scene. Officials said the fire was under control as of 1:27 p.m. ET. Fire marshals determined the space heater to be the cause of the fire through physical evidence and firsthand accounts, according to Nigro.

“This is a horrific, epic, painful moment for the city of New York,” Adams said Sunday. “The impact of this fire is going to really bring a level of pain and despair in our city. The numbers are horrific.”  Adams added: “This is going to be one of the worst fires that we have witnessed during modern times here in the city of New York.”

Building resident Luis Rosa said he was awakened Sunday by a fire alarm, but dismissed it at first, thinking it was one of the building’s periodic false alarms. But when a notification popped up on his phone, he and his mother began to worry. By then, smoke began wafting into his 13th-floor apartment and he heard sirens in the distance.

He opened the front door, but the smoke had gotten too thick for an escape, he said.

“Once I opened the door, I couldn’t even see that far down the hallway,” Rosa told The Associated Press. “So I said, OK, we can’t run down the stairs because if we run down the stairs, we’re going to end up suffocating.” “All we could do was wait,” he said.

Another resident, Vernessa Cunningham said she raced home from church after getting an alert on her cellphone that the building was on fire. “I couldn’t believe what I was seeing. I was in shock,” Cunningham, 60, said from a nearby school where some residents gathered. “I could see my apartment. The windows were all busted out. And I could see flames coming from the back of the building.”

The 120-unit building in the Twin Parks North West complex was built in 1973 as part of a project to build modern, affordable housing in the Bronx. According to Nigro, the Bronx hasn’t had this “horrific” of a fire since the Happy Land fire in 1990, which killed 87 people. Sunday’s disaster was the biggest loss of life in a blaze in the city since that fire.

Sunday’s fire was also the deadliest at a U.S. residential apartment building since 2017 when 13 people died in an apartment building, also in the Bronx, according to data from the National Fire Protection Association. Adams praised the responding firefighters, noting some ran out of oxygen in their tanks while attempting to rescue victims.

“Some of these firefighters, their oxygen tanks were empty and they still pushed through the smoke,” Adams said. “You can’t do this if you don’t feel attached to the city in this community, and I really want to thank them for putting their lives on the line to save lives.”

Adams said schools would be open and people displaced by the fire would be taken there to connect with family. He said the community was a “heavily immigrated community,” and government officials would work to help affected families find temporary and permanent housing. Those seeking assistance would not be turned over to U.S. Immigration and Customs Enforcement, according to Adams.

Senate Majority Leader Chuck Schumer, D-N.Y., pledged to provide as much support as possible at the federal level, including housing and tax assistance as well as immigration assistance for those in need. “When there’s a tragedy we come together, we don’t care about ideology, we don’t care about race, creed, color, religion,” Schumer said. “We come together, we embrace one another and we say we are for helping New Yorkers who need help.”

New York Gov. Kathy Hochul said she plans to establish a victim’s compensation fund aimed at providing new housing and covering burial costs for affected families. “We’ll take care of them because that’s what we do here in the state of New York,” Hochul said. “We are here for the Bronx, and we’re here for anyone who needs us.”