In what appears to be a re-emergence of terrorism in the provincial capital, a powerful blast ripped through the crowded Anarkali market, killing three people and injuring 33 others here on Thursday.

Police and other law enforcement agencies initially declared it a gas cylinder explosion, but later investigations confirmed it was a bomb blast. The explosion left a deep crater on the road, damaged windowpanes of several buildings, vehicles and left 33 people injured, three of them critical. Three women were among the injured, police, Rescue 1122 personnel and doctors told the media. 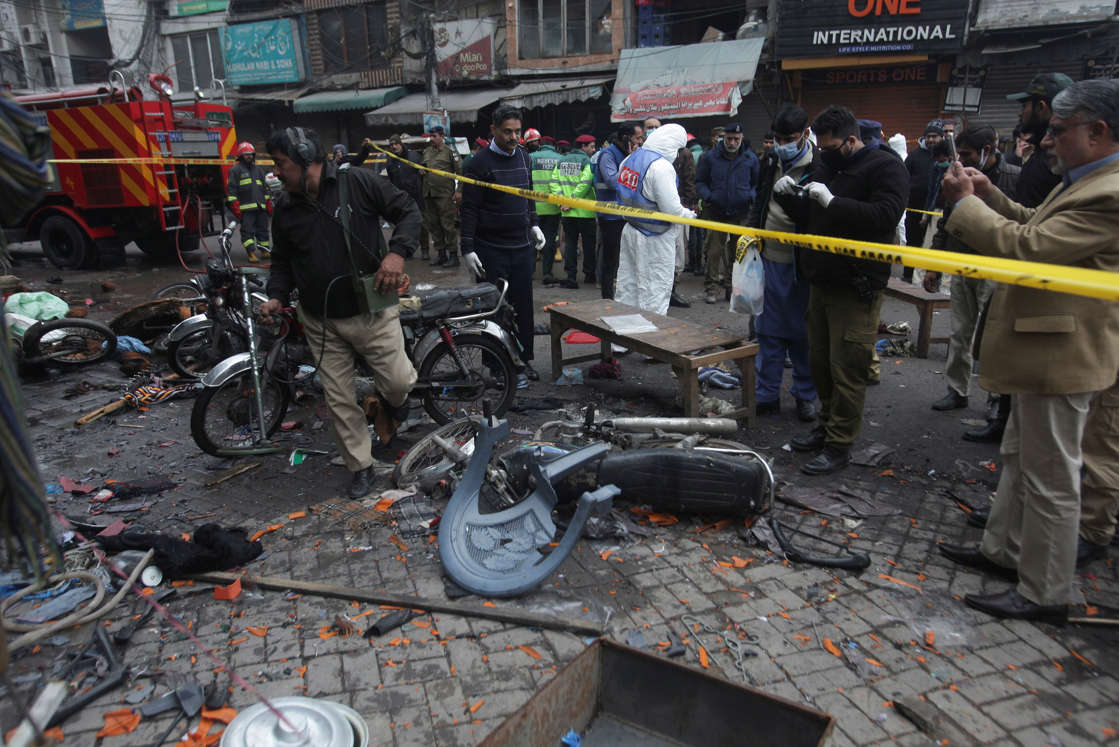 Members of crime scene unit and a bomb disposal unit survey the site after a blast in a market, in Lahore, Pakistan

One person died on the spot while two others succumbed to their injuries in hospital.

A couple of hours later, a newly emerged terrorist outfit, Baloch Nationalist Army, claimed responsibility for the blast through its social media account. The group was formed earlier this month when two minor separatist groups, Balochistan Republican Army and United Baloch Army merged and appointed Mureed Baloch as their spokesman.

However, Interior Minister Sheikh Rashid said in a TV show in the evening the Tehreek-i-Taliban Pakistan had claimed responsibility, but intelligence agencies had yet to determine who was behind the terrorist attack.

Later in the evening, the Punjab Counter-Terrorism Department (CTD) lodged a case against unidentified suspects under murder, attempted murder and anti-terrorism charges at the New Anarkali police station. The first information report was registered on the complaint of CTD Lahore Station House Officer Abid Baig.

Several photos and videos shared online showed plumes of smoke rising from a damaged motorcycle and some carts outside a shop and partially damaged set-ups nearby. Police officers believed the explosion resembled the timed-device blast carried out in July 2013 at the Old Anarkali food street that had killed five people and injured dozens.

Mayo Hospital Medical Superintendent Dr Muhammad Iftikhar confirmed two deaths in the blast, identifying the victims as Ramzan alias Boota, 31, who was received dead, and Absar Ahmad, 9. Later, one of the critically injured, Yasir, 19, of Khanpur, also died of his injuries in the hospital.

Ramzan’s brother told the media that the deceased was a father of a minor girl and ran a sweetmeat shop where he had returned to work on Thursday after spending some days in his native town of Muridke. The blast occurred near his shop that killed him on the spot, he added.

The minor Ahmad’s maternal uncle said the boy and his family had come to Lahore from Karachi and were staying in a nearby hotel. The family was taking a tour of the historic Anarkali bazaar when the blast occurred as they reached near Paan Market.

Lahore Deputy Inspector General (Operations) Dr Muhammad Abid Khan told Dawn that it seemed the explosive material was planted under a cart or on a motorbike that were found completely damaged at the blast site. The law enforcement agencies declared it a terrorist attack and were investigating whether it was an improvised explosive device (IED) or something else, he added.

The injured and the witnesses described it as the most horrifying incident of their lives in the historic bazaar.

Police officers said this was the second incident of terrorism in Lahore after the car bomb blast in Johar Town on June 23, 2021, that killed four people and injured over 21 others. An estimated 30 kilograms of explosives were used in that explosion.

An emergency was declared at public hospitals of the city besides security being intensified in and outside Lahore to trace the terrorists and handlers of the blast. Special teams of the CTD and other law enforcement agencies isolated the blast site and launched investigations into the incident.

A senior CTD officer said the LEAs were looking for a suspect as CCTV footage had detected him while planting explosives at Paan Mandi in Anarkali that exploded around four minutes after he left the site. The law enforcers were trying to monitor his movement through CCTV cameras installed around the locality, he added.