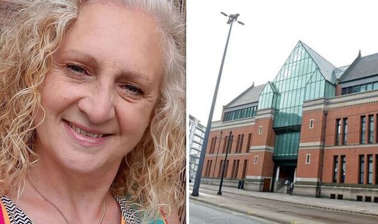 Cheryl Topham, 54, was last week spared jail despite falsely claiming £28,263.70 in benefit overpayments for years. She failed to notify the Department for Work and Pensions (DWP) about a knee replacement in 2017, which enabled her to walk confidently.

Prior to the surgery, Topham had been legitimately claiming Disability Living Allowance since 1992 as a number of health conditions impacted her ability to walk and look after herself.

But despite the successful operation, Topham turned up to a further appointment to claim Personal Independence Payment (PIP) on a pair of crutches.

The mother appeared at Minshull Street Crown Court last week and admitted dishonestly failing to notify a change of circumstances affecting entitlement to benefits and dishonestly making a false statement to obtain benefits.

But Recorder Jon Close suspended her six-month jail term for 12 months, and ordered the defendant to ten days of rehabilitation activity requirements and a nine month alcohol treatment programme.

John Richards, prosecuting, said the woman originally applied for disability allowance as she suffered from a number of ailments, including carpal tunnel syndrome, and said these conditions affected her ability to walk and look after herself.

“As a result her application was approved in November 1999 and this was moved to Employment Support Allowance in March 2015,” the lawyer said.

“She was told to inform DWP if anything changed. The investigator for DWP then became aware of allegations about the defendant and after that was authorised for surveillance between September 5 and September 9 2019.

“Footage was obtained through mobile phone footage, showing the defendant walking unaided. Then during a further appointment in which she attempted to claim PIP, she was seen using crutches.”

Topham was arrested and interviewed under caution, and after being shown the footage she admitted that she had an operation in August 2017 which saw that her conditions would no longer qualify her for the payments.

In total she obtained £17,558.60 in disability allowance payments and £10,675 in ESA payments. She was said to have no previous convictions.

Saul Brody, defending, said she has found the court process “excruciating” and is “very much ashamed” of her failure to notify the change in circumstances.

“This is a case where there was a genuine claim for at least 18 years,” he said.

“The defendant first received benefits relating to her disability in 1992, in 2008 the DWP accepted her condition was so serious that she didn’t need to continue making applications. She was entitled to the benefits, but matters went awry in 2017.”

Mr Brody said that Topham had a knee placement surgery in 2017 and acknowledged that her condition had improved and she did not make that clear to DWP. He added that she is currently in poor health and financial difficulty but a payment plan is set up with repaying back the sums.